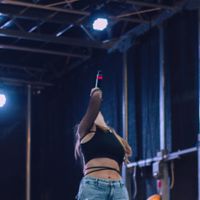 Growing up on classical music on the countryside of North Germany, the insecure teenage katie found shelter in her passion for the popular genres and for using her powerful voice. After doing only covers and working behind the scenes, she now releases her very first original songs influenced by the 2000s and pop rock/alternative bands.

We are Uelzen (interview)